By: American Property Owners Alliance May 07 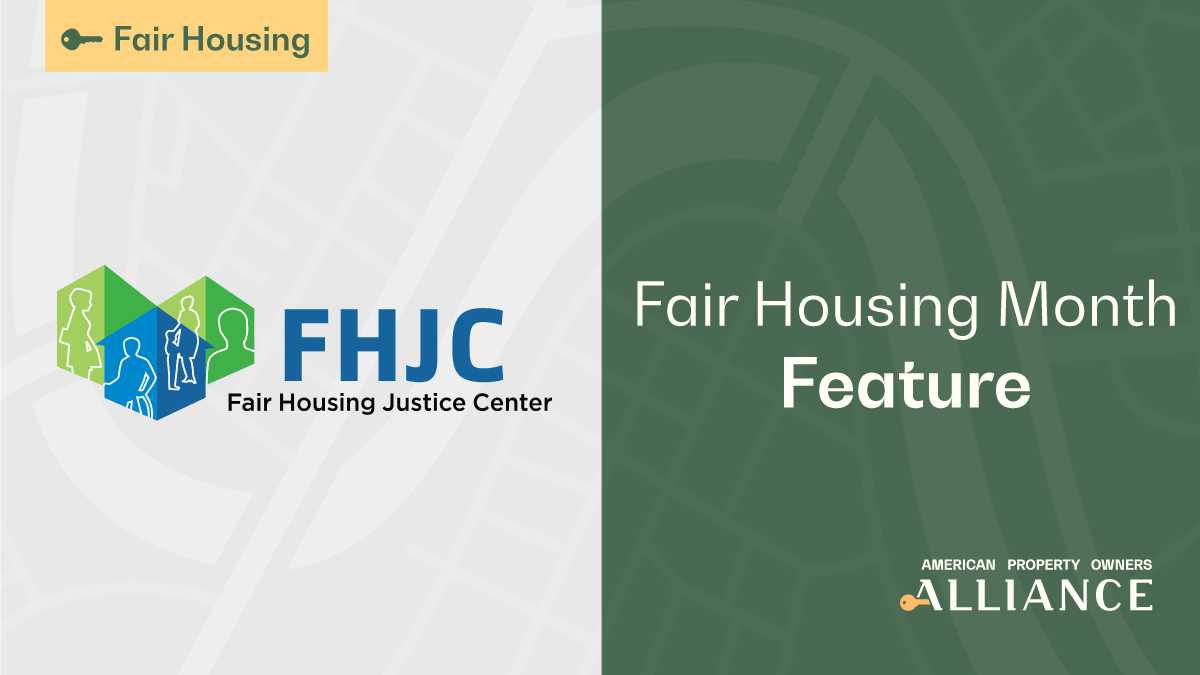 The American Property Owners Alliance (The Alliance) is deeply committed to strong fair housing protections that help make property ownership accessible for all Americans. We know that a critical step to achieve equity in homeownership is to support organizations and advocates who are dedicated to protecting fair housing rights and expanding opportunity.

Fred: Where one lives matters. Whether one has access to employment and educational opportunities, healthy food options, decent healthcare, as well as parks, recreational, and commercial amenities – nearly every aspect of our lives is affected by our zip code. Even one’s life expectancy is impacted by the neighborhood in which one resides.

Too often, housing opportunities in well-resourced areas are not equally available to all people because of persistent and pervasive discrimination in the housing market based on race, ethnicity, disability, and other protected characteristics.

More than 53 years after the passage of the federal Fair Housing Act, the housing choices of too many people are severely limited to areas with fewer resources and little or no ability to build the generational wealth that was the key to the growth of the white middle class. A recent Brookings Institution study revealed that the net worth of a typical white family is nearly ten times greater than that of a Black family, and much of that disparity is linked to residential segregation and racial discrimination[1]. And sadly, much of the historical discrimination that occurred was at the hands of the organized real estate industry, which – from its very founding – worked hand in hand with government to create and reinforce racial segregation.

What are common obstacles and discrimination that people face when trying to rent or buy a home?

Fred: While the blatant in-your-face discrimination of the past – the “slammed door” – still occurs, it has been replaced today with more polite and courteous behavior often accompanied by a smile, a handshake, and any number of deceptive statements such as “the apartment was just rented,”  “unfortunately there’s a waiting list right now,“ or “I think you would have better luck finding a home in your price range in another area” to name just a few. Consumers should think of it as more of a “revolving door” where people are politely and courteously escorted into, out of, and away from the desired housing.

Racial steering and other discriminatory conduct was outlawed by the Fair Housing Act over five decades ago, but as we saw in the 2019 Newsday story – and as we have seen in too many of our own testing investigations since 2005, illegal housing discrimination continues unabated in our metropolitan regions.

“The bottom line is that most victims of racial discrimination in the rental, sale, and financing of housing have no idea that discrimination has occurred because they have no way to compare their treatment against that of a person of a different race or national origin.”

As a result, much of the housing discrimination that occurs today goes unreported, no enforcement action is taken, and the cycle of discrimination and segregation continues. The FHJC recently detailed this reality in a new policy paper, “Ending Racism in Residential Real Estate.”

How does your organization help individuals and families overcome the barriers to housing access to increase equity in housing?

Our investigations have led to legal challenges that have opened more than 70,000 housing units to previously excluded populations, recovered more than $50 million in damages and penalties, and changed the way many housing providers and government agencies do business[2].  We also do advocacy work on fair housing policy issues, and we engage in education and outreach to increase public awareness of fair housing rights. The FHJC is the only full-service fair housing organization based in New York City.

What does the future of fair housing look like?

Fred: An honest assessment of our history shows that our segregated housing patterns were the result of a massive, coordinated, intentional, and costly effort by the real estate industry and government over many decades. Undoing the damage will require an equal effort. Five decades after the sponsors of the Fair Housing Act assured Americans that the law was aimed at stopping illegal housing discrimination and replacing our segregated metropolitan regions with “truly integrated and balanced living patterns,” most of the country remains racially segregated and systemic housing discrimination still infects most housing markets.

There are some reasons for hope.  The new administration is taking steps to restore regulations and rules that had been dismantled in the last administration.  One would enable enforcement agencies to more easily utilize a legal theory called “disparate impact” to combat subtle forms of discrimination.  Another would empower local and state governments and other recipients of federal funds to more fully implement their duty under the Fair Housing Act to “affirmatively further fair housing.” The Newsday investigation prompted state legislators in New York to propose legislation that would provide ongoing annual funding for systemic testing throughout the State.

We’re also encouraged that some of the leadership within the real estate industry are coming to terms with their history, working to change the culture of the real estate industry, and encouraging members to take anti-racist positions in their daily real estate practices. Toward that end, FHJC has launched a new social media campaign, “Together We Can End Housing Discrimination,” aimed at enlisting allies in the fight. Unlike most outreach campaigns designed to reach direct victims, the new campaign is directed at people – including those in the real estate industry – who have credible information about discriminatory policies and practices. The agent who knows that a colleague is steering, the broker whose company refuses to do business in certain areas – anyone who’s unsure of what to do about the discrimination they have learned is occurring. Contact the FHJC (anonymously if you prefer) by visiting https://www.fairhousingjustice.org/together-we-can-end-housing-discrimination , and we’ll take it from there.

About the American Property Owners Alliance